Who's Going to be in Charge of Anne Heche's Estate?

We're going to talk about the most recent in the long line of celebrities who have died and left behind a total mess when it comes to sorting out their estate. When we see these stories hit the news we always wonder how can celebrities still do this? I mean, there have been so many stories recently, when I went back and looked at some of my files we have:

On the other end of the spectrum, folks like the Queen of England, Ric Ocasek, and Kirk Douglas, who all had very clear estate plans in place so that none of these kinds of things are going to hit the news.

Anne Heche Died Without a Will

The Administrator of Her Estate

The administrator of the estate is important because when you have someone like Anne who's been in movies and has upcoming projects, she also had a book that's about to come out. We need to make sure we have an administrator who can take care of all these upcoming projects that need to be released and be the person who administers and deal with copyrights and be able to profits that come from but by not having a will, or having the will solely be a 2011 email that was supposedly sent to the father of one of our children and is left to the court to figure out.

What Should Anne Have Done?

If Anne had an attorney, what should she have done instead?

Hopefully, you can see that celebrities have the same problems the rest of us have when it comes to estate planning, a lot of them never get around to it, and then you're left with the stories. Now the difference is what happens to you chances are it's not going to make international nervous that's not going to be the front page of a website, that you John Smith died without a will. However, the issues are still the same. Even if they're not all over the news.

So rather than try to do it yourself, don't just send an email from about 11 years ago claiming to be or will and what you want to have happen. Create an estate plan. You want to work with professionals, work with an attorney, work with your financial advisor, work with an accountant to put together a plan especially when you have children under the age of 18 like and you want to make sure that you have a plan set out for them so they're not left adrift without any guidance of where to go. If you're ready to get started, we can set up a Legal Strategy Session, a 15 or 20-minute phone call to go over where you are in the process. Whether we're updating an old estate plan, or starting fresh, or creating a new one. We want to make sure that you know your options and have the best way to plan for your legacy. 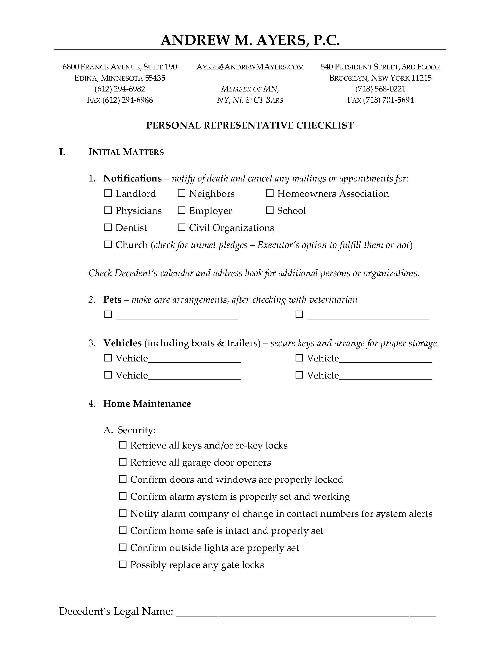 The next in our series of Excerpts from Edina, focusing on estate planning strategies for your family's legacy.

If you've been appointed the personal representative or executor of someone's estate, this checklist will assist you with some common items you'll need to deal with.

Add-In Strategies to Help You Ace Your Estate Planning

Get your copy of Add-In Strategies to Help You Ace Your Estate Planning and learn about the legal and financial benefits of a comprehensive estate plan.

Nov
28
How Much Detail Do I Need in My Will?
When you are putting together a will, a common question you may have is "How much detail do I need to go into in my will?" and the answer may surprise you.
Read More +
Nov
21
Talking Estate Planning at Thanksgiving
Although you may not have it on your mind, Thanksgiving can be a great time to talk about estate planning with your family.
Read More +
Oct
31
Halloween Estate Planning Lessons? Yup, Trick or Treat...
Since Halloween falls on a Monday this year, we get to briefly go through the tricks and treats of your estate planning.
Read More +