Tupac's Estate is in a Fight? 26 Years Later? YES

Is Tupac's estate, really still in a legal fight? It's 26 years after he died. But in fact, yes, there's still a few things going on. My name is Andrew Ayers. I'm an estate planning and business law attorney with offices in Edina, Minnesota and New York City. Today we're going to look at a celebrity estate that I wasn't expecting to see in the news in 2022. But apparently we are. So back in 1996 Yes, 26 years ago, Tupac Shakur was killed in Las Vegas. Now when I first saw a story the other week about a celebrity estate back in the news, Tupac was about the last person on that list that I thought would be the estate in the news but what has happened is there's an NFT that's been created for from the artwork for his Don Killuminati album, which was Don Killuminati: The 7 Day Theory. Now, I wasn't thinking back that long ago that even being NFT and how do you make an NFT? 26 years later? Well, of course, the original artist has made an NFT the artwork, and that's become at the center of this fight between two parts the state and the artist and the Auction House decided to sell it anyway. So back when Tupac died, there was no such thing as an NFT but what there was was a statement. Now in his defense, Tupac was only 25 years old when he died. He was living his life. He was making music, great music videos just all over the country, and he apparently never got around. And while it probably was also the last thing in his mind at the time, by not having a will which created quite a bit fighting between his family after he's gone. Now the current issue, of course has nothing to do with the NFT which wasn't in existence back when I die. But now here we are dealing with it. And then the state would have sorted all these issues out so what I found when I was reading is that they took the NFT from the public and the dispute centers around whether or not the artwork should be part of two boxes state now. The state is being run currently by a foundation set up by two box mother who has now also since died. So we're really going down the list trying to figure out who's in charge of what when it comes to somebody's estate. We've seen very similar situations out here in Minnesota, with Prince's estate. And also that that will and we've had the federal government trying to come in and figure out what kind of taxes they're entitled to and then also family members trying to figure out who should be controlling for instance catalog. So when we look at performance, especially musicians and other artists who leave behind intellectual property, and things that can be sold and have value, it really shows the importance of meeting on stage. Now a lot of my friends of course are going to see this and say listen, I don't record music. I'm not like Tupac and I don't need this whole estate plan. Well, the issues raised by the Tupac spied are issues that can affect you and your family. You can actually end up with your family having to fight for years and years after you're gone. If we don't have any kind of mistake.

If we go back to what's going on with Tupac the first thing he could have done was creative. Well, simply creating well saying, Here's what happens to my estate when I'm gone would have solved probably 95% of this. You would have had a good idea at the time he was gone whether or not that artwork was part of his estate or not. He would have have somebody who can then take care of the state and be the one in charge of the finances. The other interesting twist we've seen here is the tool box mother set up a company after he was gone to manage the rights to his music and his other artwork. This is also something you can do. You can whether it's a company or whether it's a trust, we can set up a payment mechanism where these kinds of future interest that will be taken off money can be managed by somebody. In the case of a trust. We have a trustee who manages that. In the case of a company we can set up an LLC. Now as we're coming off of summary, one of the common things that we do out here is we go to cabinets, and if you've got that family cabin, let's say you rent it out for part of the summer, and your family uses it for the rest. That's a prime opportunity to use an LLC to protect that asset. So what happens when you die is instead of having to put your family cabin through the LLC will continue to operate and you can pass the shares and that LLC on to the next generation while your assets may not be the millions of dollars and all the fantastic songs that Tupac created, or Prince's catalogue or Aretha Franklin or Tom Petty's estate fighting over who's going to control that music as they look to release the next wildflowers album. What you're looking at here is a simple way to take your estate plan documents and say who's going to manage it, and it will get any income from these are easily done. It's not a complex process. But when you look back at the stories like Tupac 26 years ago, these things can still pop up. So you can probably get this isn't something you want to try and do it yourself. You can really leave behind a big headache for your family. If you tried to do this yourself and either create the wrong type of company create an improper trust or it's not properly funded. We're just not even doing state plan. Now you're going to try to do it but you're not really sure how to get started. So the second way you can do it better than do it yourself is speak to professionals. Speak to your financial advisor, your accountant speak to an estate planning attorney who can help you put together a plan for you and your legacy. If you'd like to get started then go to my website AndrewMAyers.com. And it's gonna be a red schedule consultation button. On the homepage, click that button you'll be taken to my calendar. You can set up a 15 or 20 minute legal strategy session to discuss where you are in the process. And what are some next steps you can take. Your legacy may not be hundreds of rap songs or Tupac has but your your legacy is still worth protecting. And we want to make sure that that protection is in place. 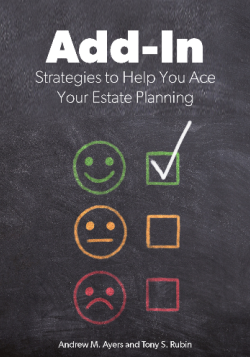 Add-In Strategies to Help You Ace Your Estate PlanningRequest Information