Have You Recovered from this Year's Amazon Prime Day? 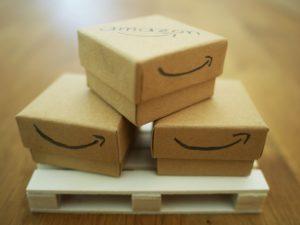 Have you recovered from this year’s Amazon Prime Day? (Or this year, days…) In the short span of only a few years, Amazon has created an entire shopping holiday, falling in the traditionally shopping bare time of July. Aside from back to school supplies, most of the summer spending is done on vacations and summer camps. But now, we spend a few days in July fixated on what Amazon will have on sale. Not to be outdone, other retailers are now offering their own mid-summer sales, often with a comic take on the word “prime.” (My favorite was Prawn Day from Postmates…)

While I was meeting with clients on Monday, their daughter was with them at the table and spent the entire time browsing on her phone. As we went through the details of the estate plan, she eventually popped her head up. Sometimes she had some information or something to add. But generally, she stayed on her phone. As we neared the end of the discussion, my client finally made her put the phone down. She had been shopping Amazon Prime Day deals the whole time.

What Made Her Put Down Her Phone?

It took nearly an hour, but her mother finally made her put her phone down. We had completed our part of the meeting, but her parents had also taken some time to think about her as well. Since she was over the age of 18, we had discussed creating a health care power of attorney for her. She was in the room, but not paying attention to the discussion. So when we finally had her attention, we were able to get her input. Like many people her age, she assumed that she was “too young” to need any of these documents. But as long as you are over the age of 18, these documents can be very necessary.

If you are in an accident and can’t speak, who will speak for you? You may think that the doctor will automatically speak to the right person, but will they? What if you and your spouse never talked about whether you want to be on life support? You could inadvertently create tension between your family members who disagree on what to do.

From a practical standpoint, without a plan, the hospital may use costly medical treatments that you would not have wanted. Especially if you have religious or philosophical views, they may never be told to the doctors.

After we got her attention, we put together a plan for her healthcare power of attorney. On a hunch, we had set aside an extra half hour at the end of the meeting to get this topic discussed…

Amazon Prime Day likely didn’t inspire you to get a healthcare power of attorney. But maybe, after buying your new Sonos One speaker and planning how to spend that gift card that came with it, you want to do a little planning for yourself as well.

Already have a Healthcare Power of Attorney but it’s been a few years and you may want to make some changes? Never even thought of it before but now think it’s a good idea? Call my office to set up a review of your document or a meeting to talk about creating one for you – (877) AMAYERS.