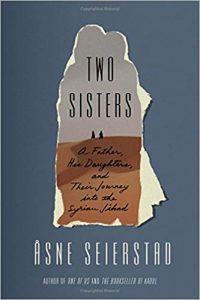 In my ongoing quest to read 52 books this year (I actually passed the goal a few weeks ago, but why stop now?), I came across Two Sisters by Asne Seierstad.

The book tells the story of a Somali family in Norway who have five children. Unbeknownst to the parents, their daughters have become increasingly involved with their local religious institutions. One day, they decide to leave Norway to join up with the jihadists of Islamic State in Syria. Ms. Seierstad does a wonderful job of telling the backstory (as best she can) and the efforts by the parents to bring their daughters back to Norway.

The primary source for the book is the father of the women. Upon learning they have left, he tries to stop them from crossing into Syria. You can feel his heartbreak as his daughters travel from Sweden to Turkey. He travels to Turkey, and is probably in the same city as they are at the same time, but is unable to stop them from crossing the border.

From there, the father is involved with a man on the Syrian side of the border. His new friend does all he can to help the father locate his girls. At one point, the father even has the chance to speak to his eldest daughter, only to be dragged away, beaten and tortured, until he is eventually released. IS finally realizes that he is not a spy.

The most impressive part of this book is the way Ms. Seierstad is able to piece together the story of this family. As she acknowledges at the end of the book, the daughters refused to speak to her. So she was forced to write the book without their direct input. Even in doing so, she has crafted a wonderfully paced story. It moves along like a spy novel or a work of historical fiction. It’s easy to read and you don’t want to put it down once you start it.

If you’re looking for a good book to pick up this fall, find Two Sisters at your library or grab it from a bookstore or Amazon.