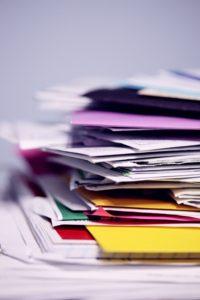 It was almost like someone was spying on my conversation the other night. I was at a social and talking with another attorney about a case I had years ago where the other attorney was complaining about discovery documents. The next morning, my inbox has a blog about not printing out electronically stored information and the need for a genuine meet and confer conference. I agree with Josh Gilliland that these types of disputes really shouldn’t happen anymore. If the attorneys have an actual meet and confer conference (required by court rules), these types of issues can be resolved long before any dispute arises. One of the things that always should get discussed is the production of electronically stored information.

In 2019, it’s more likely than not that what you are producing is electronically stored. Years ago, I remember getting a load of boxes of documents delivered to my office. The documents in those boxes were nothing more than printouts of PDF documents. The other attorney had taken the time to hit the “Print” button on thousands of pages of electronically stored information. And once they had spent all that money to send that paper to my office? It went back in the scanner, was converted to a searchable PDF, and shredded. A corner of a forest waste wasted for no reason…

Years Ago in Brooklyn…

At the social the other night, I was talking about a divorce case I had years ago in Brooklyn. We began the discovery phase (exchanging documents) and the other attorney had requested my client’s bank records. My client downloaded the records and uploaded them to me through my client portal. We organized the records, numbered them, and put them on a CD-ROM for the other attorney. We sent them out and thought we had the issue resolved.

Much to our surprise, at the next court appearance, the other attorney complained. He complained that there were too many pages of documents on the CD-ROM. How was he supposed to review them all? Why didn’t I provide him with printed copies of all the pages? The other attorney believed that I had done this to “overwhelm” his office. Luckily for me, I had an excellent judge on the case. The judge had an interesting smirk on his face as he turned to me.

He asked me what was on the disc (and I told him). I confirmed that the files on the disc were copies of the PDF files my client downloaded from his financial institutions. And they were the records requested by the other attorney (I didn’t throw in others to “overwhelm” anyone). The PDF files were searchable and numbered.

As the judge turned back to the other attorney, I could anticipate what was coming (I had been in this courtroom many times before). He began to question the other attorney about whether he understood what electronically stored information is. And when the attorney stammered a bit, he also told the attorney he was free to take the CD-ROM to the Kinko’s in the lobby of his building and have the PDF’s printed out. The judge agreed it was a total waste of time and money to do it that way, but if that’s the way his client wanted to spend their money, it’s their prerogative. (Note: The client was NOT pleased at this turn of events…)

My lasting impression was the advice from the judge to the other attorney:

Your client has paid your bill.

You’ve been given documents to review.

Do what you are paid to do and review the documents.

Stop wasting all of our time.

One of the most important phases of any lawsuit is the exchange of documents. Be sure that you are properly keeping your documents, organizing them and be ready to produce them if needed. If you believe you need to file a lawsuit, or you have been served with a lawsuit and need an attorney, call my office to set up a Legal Strategy Session to discuss the best options for you – (877) AMAYERS.